What’s the other story?

That’s whether it’s worthwhile for the Cheng’s to try to coax Cheng Biyuan into returning!

Everybody understood the reasoning behind it.

After his words, nobody uttered anything. Everybody had silently agreed with him!

The two with the highest seniority still hadn’t said anything and nobody could tell what were their thoughts.

The living room had returned to silence all over again!

Silently, everything looked down at their toes.

Nobody knew how much time had passed before the Cheng’s head of household casted a glance over at the first elder. Slowly, he said, “I say, there’s no need for us to make a move for now. There are plenty of others out there who are more eager to find out than us. Once they have found that out, we’d find out about it too!”

“Master, would that be too late by then?” Fourth elder asked softly.

“Too late? Hrm!” Laughed the Cheng’s head of household. “It could never be too late. That bastard boy, he has our blood running in his veins to the day he dies!”

The simple sentence was enough to make everybody sensed his ruthlessness and heartlessness. At the same time, he had clearly conveyed to everybody there that, for the rest of Cheng Biyuan’s life, he would never be able to escape his fate of being under the control of the Cheng’s.

Unfortunately, back at this day and age, everybody talked about filial obedience; everybody wanted to be attached to one’s filial roots; everybody focused heavily on their bloodline. These were the rules used to bind many individuals.

The family could determine a younger generation’s life. If the family chose to single out certain individual, surely they have their reasons.

Cheng Biyuan would not be able to change this fact!

Right then, the first elder, who has been resting with his eyes closed finally opened his eyes, and nonchalantly said, “Let’s proceed following the opinion of the master of the house!”

“Yes, First Elder!” With that, all the elders stood and bowed to him.

First elder nodded and disappeared in a flash.

Everybody was already used to that.

The Cheng’s master of the house rose as well, and said toward everyone there, “Fellow Elders, let’s dismiss. If we hear anything else, we will notify everyone!”

The fellow elders nodded and dispersed.

The eleventh elder was the last to leave. A look at the living room, he couldn’t help but reminisced the day when Cheng Biyuan’s fate was determined for the first time. He let out a silent sigh.

His slightly strayed to the inscribed sign hanging above. The forceful characters said, “Hall of Justice and Honesty”. Justice? Honesty? Eleventh elder repeated that to himself in his mind, an ironic smile appeared on his face. 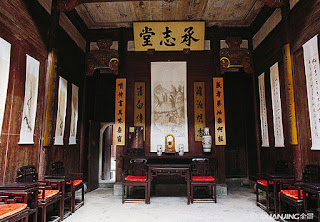 Photo: An inscribed board
Source: quanjing.com

No way could the Cheng’s actions live up to that. If anything, they were bringing shame to the sign.

A little while later, he turned and left.

The Gu’s at the city of Yan.

The Gu’s was one of the top three most powerful families in the city of Yan. Other than the Luo’s, it would have to be the Gu’s. The other one was a relatively weaker family.

Inside the Gu’s resident!

Inside an exquisite and luxurious courtyard, sat the Gu’s young master Gu Gaoyi and his wife Yan Qingqing in the second living room.

Both of them were very attractive individuals. Gu Gaoyi exudes a commanding feel, and Yan Qingqing classy and elegant. They were the most talked about couple within the Gu’s.

“Ye, look at your. What is it that you couldn’t share with me?” nagged the dissatisfied Mrs. Gu.

“It’s not that I can’t share, I just don’t know where to even begin!” sighing, Gu Gaoyi looked at his wife helplessly and said in a soft tone.

Hearing this, Mrs. Gu was even more unhappy. Bluntly, she said, “Say it however you want. Am I an outsider? Making you feel so troubled sharing something with me?”

“Of course not!” Gu Gaoyi didn’t know how to react to that, helplessly he shook his head,”Qingqing, you remember Cheng Biyuan from the Cheng’s in Emperor City?”