TWQQF ch 70 - Crazy News; Everybody Has Their Own Thoughts (3)

What nobody had expected was Cheng Biyuan falling in love with the 12-year-old Luo Yuqin, the single child of the Luo’s, the pearl of Master Luo. Their love affair was not blessed by either of the families, as Master Luo, much like the Cheng’s, also wanted his daughter to marry into the four top powers. The masters of the two families had the same ideas, so both of them tried to nip this blossoming romance in the bud.

A year later, the accident happened. Cheng Biyuan was injured by an unknown culprit. Not only was he having a difficult time recovering from his injuries, his cultivation also started to decline. The Cheng’s eventually gave up on him as he could no longer retain his cultivation.

Going from a pampered genius to a useless failure, being given up by even the elders of the Cheng’s, let alone all the back-stabbers, the devastation from the drastic change in the way he was being treated nearly crushed him.

Luckily Luo Yuqin sneaked out from her house and found Cheng Biyuan. The two were sad and happy at the same time when they reunited. Fearing their families would find out, they’ve decided to flee.

Once their escape was discovered, a war broke out between the Cheng’s and the Luo’s; many were killed or injured. Both families hated Cheng Biyuan to his guts and a bounty was put out on him.

The two had no knowledge of any of this and survived a year on their own. That had allowed Cheng Biyuan to recover from his injuries, unfortunately, he had to re-cultivate from the ground up.

When the Cheng’s finally found them, it was three months after they’d gotten married. They were taken back to the Cheng’s.

The resurface of the two stirred up conflicts between the two families all over again. Especially from Master Luo, he wanted Cheng Biyuan dead in order to make up for everything. Finally, Luo Yuqin threatened to kill herself in front of everyone in order to save Cheng Biyuan.

At the end, the Cheng’s had to pay a large sum to cover up the scandal. Luo Yuqin was already pregnant at this time, so she married into the Cheng’s after all.

It was supposed to be a joyful event, but the Cheng’s viewed it as shameful. They’ve only sent a sedan chair to pick her up. There were no celebrations or banquets, it was worse than the wedding of a servant. 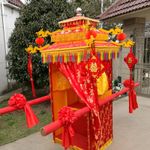 After their wedding, they were put under house arrest inside a worn out small yard. Cheng Biyuan’s brothers visited often, and mocked and ridiculed them every time; never treated them as family.

It was until Cheng Biyuan assisted in the family business and saved the family from bankruptcies time and again and also brought in deals after deals of profits before their living situation improved.

Regardless of how much time and effort they have put in, their status among the Cheng’s were barely better than of a regular steward; sometimes even the butler looked down on them.

They thought this was going to be their lives, until Cheng Xiao Xiao was 10 years-old. She ran into the drunken Cheng Bihua one night; he was so drunk that he tried to molest his own niece. When Cheng Biyuan found out, he gave him a beating and troubles ensued all over again.

Holding a grudge, Cheng Bihua set Cheng Biyuan up by luring him into the bedroom of an unmarried, genius girl from a distance branch of the family. Even though nothing really happened, just being in the room of an unmarried girl was nonetheless a big deal.

As much as the Cheng’s tried to cover up the incident, some words got out anyhow. Master Luo made the announcement that Cheng Biyuan was never allowed to step foot in the Luo’s for as long as he’s alive.

After being exiled from Emperor City, Cheng Biyuan and his family ran into many hardships before they were finally able to settle down in Willow Village. He thought they would finally be able to live their quiet and peaceful lives until Cheng Bihua learned of their whereabouts a year ago, and sent out hit men after him.