Transmigrating With a Cleaver ch 10.2 - Only One Bed?


“Mystical beasts’ meats?” The shopkeeper stopped chopping at the meat and looked up, “Those aren’t cheap. Are you sure you want them?”

Right away Qin Luo knew he has some in stock, “Money is not an object, can you show them to me?”

The shopkeeper put down his knife and sloppily wiped his hands on a dirty piece of cloth before saying, “Sure, I’ll show them to you. Follow me!”


The three of them walked through a dark alleyway into the backyard of the meat shop.

“Class F ingredient heng gong fish detected, suggested cooking methods are poached in spice, braised, or raw. Consuming this will increase one’s agility for up to an hour.” 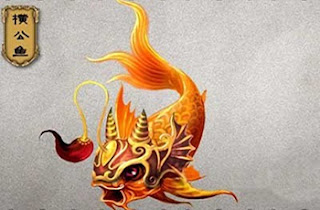 Qin Luo looked at the red fish that was already chopped into dozens of pieces and was excited. If only he could make this dish successfully, the experience points for the Xuanyuan cleaver will go up again!

“Shopkeeper, how much is the fish?”

The shopkeeper reached out one finger and said, “One jin (500 grams) for one gold piece. The max you can buy is 10 jins.”

Chen Yun was shocked, “Why is it so expensive?!”

“Expensive?” The shopkeeper laughed coldly, “You don’t have to take it. The house of the lord of the 7th district had already reserved this entire fish. I was only being nice to let you have some seeing that you are new customers. I don’t care if you want it or not!”

“Yes! Yes! Yes!” Qin Luo said immediately before he pulled Chen Yun to one side and whispered into her ears, “Give me 5 more gold pieces, this fish meat will be very useful to me!”

Chen Yun pulled up the pouch with the gold coins and handed it over to Qin Luo, “Take it! It was your money to begin with. I don’t care at all!”

“Thank you!” said Qin Luo, and handed the money pouch over to the shopkeeper, “Shopkeeper, give me five jins (2,500 grams).”

“Surely!” The shopkeeper seemingly pulled out a scale from nowhere and placed on top of it a medium size piece of fish meat. “Just a tad over five jins!”

“Well, I like you, young man, I’ll let you have the extra for free!” The shopkeeper took an extra long leaf and wrapped the meat inside of it, “Have a nice day!”

“Thank you, shopkeeper!” Smiling, Qin Luo took the meat from the shopkeeper. He then picked up another big slap of fatty meat before he left the butcher shop with Chen Yun.

Chen Yun took Qin Luo down a crooked path and after many twists and turns, they finally arrived at a small residence.

Chen Yun blushed, “But it’s very inexpensive, only half a gold piece for a month. Even though there is only one room, but it comes with a small yard still!”

Just one room? Qin Luo felt his blood heated up when he heard that!

Did that mean there was also only one bed?