“Ho ho ho….,” laughed Chang Xiao Xiao happily and asked again, “Of course, we will be the strongest!”

Casting a glance at him, she suddenly thought of something, “Zheng Yuan, what kind of beast do you like?”

“Yes, what do you like? Wolf? Tiger? Lion? Just don’t ask for azure dragon, white tiger, black tortoise (“xuanwu”), vermilion bird1, kirin, or giant eagle. Those I don’t have!” 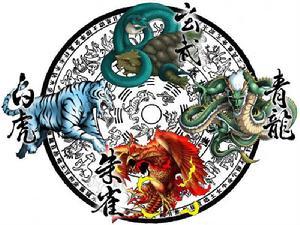 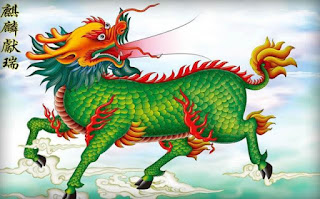 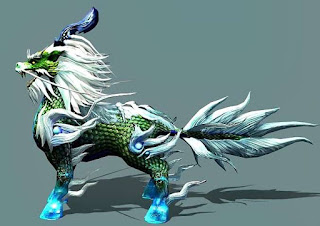 More Kirin
(As they are mythical creatures, there are many different rendition / interpretation of what they look like. Hope this will help give you an idea of what a kirin looks like. J)
Photo credit: mingianguishi.com

Well, it wasn’t that they didn’t exist, but the dimension haven’t leveled up enough. She couldn’t quite produce them just yet.

“Big sister, what do you mean?” Cheng Zheng Yuan still didn’t know what her intention was.

Cheng Xiao Xiao patted him on his shoulder, “Zheng Yuan, never mind why I ask, just tell me what you like the best right now?”

“Wolf? Tiger? Lion?” Cheng Zheng Yuan mumbled to himself, then with the most seriously tone, he said, “Big sister, I like wolves!”

She had already collected and tamed an azure wolf a while back. Smiling, she said, “Zheng Yuan, you know, there will be turmoil coming our way shortly. So I am going to give you an azure wolf for a pet!”

Cheng Zheng Yuan shouted out uncontrollably. But before he could say anything else, a flash appeared next to his sister and a gigantic, ferocious azure wolf now stood in front of him.

He was stunned. The azure wolf eyed his new master with disgruntlement.

The azure wolf and his young mistress could communicate telepathically, he knew full well that he has been gifted to the rug rat in front of him. He wasn’t pleased with that decision, but also knew that how he felt was irrelevant.

“Zheng Yuan, to tell you the truth. I am a beast tamer!” Cheng Xiao Xiao chuckled at the dumbfounded look on her brother.

“Tame… tame…. Big sister, you said you are a beast tamer?” Cheng Zheng Yuan couldn’t quite comprehend what he had just heard.

How did he now know when the sister that he grew up with had became so powerful? He had no idea. And she’s a beast tamer?

Cheng Xiao Xiao continued to ask, “What, don’t you believe me? Hasn’t the appearance of the azure wolf convinced you of that? Xiao Ching2, go to your new master!”

“That.. that’s not what I meant!” Cheng Zheng Yuan shook his head, then turned and looked at the azure wolf. He knew his sister wasn’t lying to him.

But this surprise was too huge! He couldn’t quite process that just yet! He knew there were azure wolves in the hidden parts of the mountains. He had hunted one before when he went he went hunting with his father in the past, but that one was much smaller than this one in size.

“Big sister, thank you so much!” Cheng Zheng Yuan calmed down and accepted his gift and thanked his sister gratefully.

“You are welcome. Having this king of all wolves, I am also going to delegate to you the responsibilities of taking care of the entire clan of wolves. I trust that you will do a good job project our place, right?”

“Good, take the azure wolf for walks whenever you have free time and guard our land. I think we are expecting quite a few visitors shortly!”

“Big sister, I understand. I will do a good job and not disappoint you!”

“Okay, I am putting my trust in you!”

1.     Ancient reference to four mythical scared beasts represented by the quartet of the eastern sky, each making up of 7 constellations.
2.     Xiao = small. Ching = azure. Common way to nick name someone by adding “xiao” in front of their name.