Hunters of the Forbidden Region ch 1.2 - Have a Smoke, Baye

The beauty was visibly shocked by his action. She didn’t have enough time to stop him verbally so she had no choice but to life her leg immediately and the tip of her heel hit his knee almost right away.
The sturdy man just felt that his entire leg went numb with a tingling sensation. He let out a soft hrmph and stumbled a few steps. Startled, he said, “Miss Anne, you…”
“Wei Xingshan,” interjected the beauty coldly, “Let me remind you this. You must be polite to this Mr. Lin. We are here to ask him a favor. It will be our honor if he will join us.”

“Miss Anne,” The sturdy man, Wie Xingshan, looked displeased, “We belong to the same employer, and I command the best mercenary team in the entire Asia. What couldn’t we handle?”
The coldness on Miss Anne’s face subsided a little. Calmly she said, “Captain Wei, if these are humans that we are fighting, of course I will have a lot of faith in you and your team. But different skill sets are required here. What are talking about are those things.”
The door opened with a creaking noise during their conversation.
And it was, indeed, Lin Shuo standing behind the door.
He dressed in appropriate outfit that belonging to a teacher in a village, a fountain pen in his breast pocket. No expression could be made out from his scrawny face.
Anne saw his face and felt as if a burden have been lifted off of her shoulder. At the same time, she could feel the coldness exuded from that face.
The man’s look, even through his spectacles, was still sharp like daggers, sending chills down one’s spine.
This was a look that could only belong to someone who had been through mountain of corpses and rivers of blood.
Remembering all the rumors around him, Anne turned a bit pale.
“Greetings, Mr. Lin. My name is Anne.” Anne did her best to suppress her fear and made herself looked at ease.
The air of rejection coming from Lin Shou was more than obvious. It was only when he saw the crowd standing outside did he his look turned a little more friendly.
“C’mon in.” said Lin Shuo nonchalantly then turned and walked back inside the house.
The two followed him inside the Adobe house and Anne turned around to close the door behind her.
Inside the minimalistic adobe house, there wasn’t even a second chair. Lin Shuo sat down on his own chair by the desk, and Anne and Wie Xingshan have no choice but to stand.
Lin Shuo didn’t pay any attention to them, the air was awkward.
Flutter.
Fluttering it’s wings, the starling flew inside the house and landed on the desk. It cocked it’s head and looked at the two strangers.
Looking at the starling, sturdy guy Wie Xingshan nodded, “This starling looks to be of good spirit. The hair on his hair looks like a crown.”
“Asshole.” Said the starling.
Wie Xingshan smiled. Naturally he wouldn’t be offended by a bird, it only made him want to tease it some more.
He took a few steps forward and bent over to look the starling at eye-level. Pretending to be angry, he said, “Why are you calling me names?”
“Asshole.” Said the starling again.
“Is ‘asshole’ the only word you know? Can you say anything else?”
“Asshole.” Repeated the starling.
Anne looked down, rummaged through her purse, and pulled out a pack of Chunghwa brand cigarette1 and unwrapped it. She placed it between her lips and lit it up with a lighter. 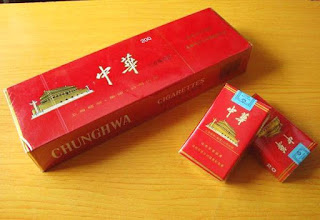 Chunghwa brand cigarette
Photo credit: wemedia.ifeng.com
She then removed it from her lips, holding it carefully with both hands, she turned the cigarette butt toward herself and the filter side toward the starling. Taking a few steps forward, she said in a serious tone, “Baye, please have a cigarette. We have long heard that you enjoy good smoke and good wine. I was only able to find this somewhat decent brand of cigarette but I wasn’t able to get hold of any wine. I hope you will pardon us.”
After hearing her words, Lin Shuo was taken aback a little. He looked at Anne with squinted eyes.
Wie Xingshan’s mouth dropped open. He looked from the starling to Anne. He felt for sure that Anne had gone insane.
“So you knew about me huh?” The starling stared straight at the woman and spoke.
“Everybody have heard you with among the circle of hunters. You’ve left behind so many legends.” Replied Anne hastily.
“I have never seen a woman like you among the circle of hunters.” Said the starling coldly.
“A colleague of mine had the good fortune of meeting you once. He found out that I will be paying you and Mr. Lin a visit and told me explicitly to wait on you well.” Anne lowered her head slightly and maintained the way she was holding the cigarette.
“Go head,” Lin Shuo interjected, “Such a good cigarette, there’s no reason to let it go to waste.”
The starling put aside his excessive politeness after his words, accepted the cigarette, and placed it inside its own beaks, “Woman, you are quite good at this.”
“Thank you, Baye,” smiled Anne.
Wie Xingshan had finally came to and muttered, “Is it really just a bird?”
Nobody paid him any attention.
Anne saw that the starling started smoking and looked as though she had completed an important assignment. Her stiff body relaxed.
With glittering eyes she looked at Lin Shuo, struggling with her words.
“It would seemed that you have done quite a bit of research on me beforehand.”
Lin Shuo drummed lightly on the desk and said nonchalantly, “Do tell, why did you spend so much time learning all about me? What is this all about?”
___
Note:
1.       For the sake of reference, Chunghwa brand cigarette ranked #31 most expensive in 2017. I was hoping to find a more exciting-looking picture; alas, how exciting can a pack of cigarette look? =)