"I was once in combat with it six years ago,” Lin Shuo decided to divulge a bit of information. He felt that Anne was too overconfident about his ability.
This was, naturally, not a bad thing for Lin Shuo. But as one of the leaders for the troop, her mentality might not necessarily be a good thing.
“Have you heard of the incident at Mount Kunlun six years ago?” asked Lin Shuo.
“A little bit of it. It was a tragedy among the circle of hunters. Thirty or so of you entered the mountain, and you were the sole survivor,” said Anne. “Truth be told, this was the reason ILRO decided that we must have you as the leader of this mission.”
After saying that, she seemed to recall something else, “Do you mean that the creature we are facing at Heilongjiang right now is the same creature from Mount Kunlun that annihilated almost the entire group of hunters?”
“From the evidence we have so far, I’d say so,” nodded Lin Shuo. Then, casted a look at Anne, “You know who taught me all my skills?”
“Naturally the 86th head of the Lin’s household and also your father, Mr. Lin Yaoshan,” replied Anne in the most respectful tone. “He is the current leader of the hunter circle.”
“My father died on Mount Kunlun six years ago,” a painful look flashed past him briefly but his tone remained calm.
Anne was obviously shocked. She then lowered her head and said, “I am sorry. We didn’t know.”
“We didn’t expect you to,” said Lin Shuo. “Our battle on Mount Kunlun was the best kept secret among the hunter circle. It was already quite impressive that you have found out about that.”
“If that is the case, does that mean you are the current leader of the hunter circle as Mr. Lin senior had already passed away in the unfortunate event?” Anne look rejuvenated.
Lin Shuo paused for a second and casted a glance at Anne, “There was never a leader within the circle of hunters. The hunters in the group were just being respectful and willing to follow our lead when we work together on missions.”
“Oh,” nodded Anne, like she had learned something new. She then asked again, “I have also heard that, since the very ancient time, in addition to the ebony box that you had on your back, the Lin family has another token of the hunters’ circle called the Dragon Bone Thumb Ring. This token represents the absolute authority that the Lin family among hunters.” 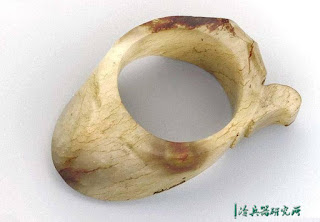 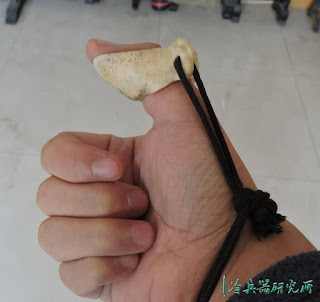 Picture: Dragon Bone Thumb Ring (What I think right now. I might update to a different picture if later on the description suggests otherwise.)
Source: read01.com 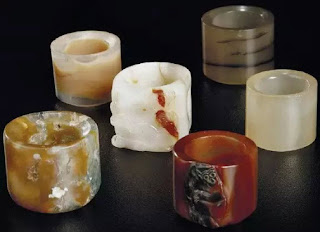 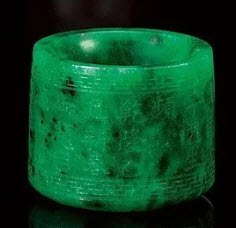 Picture: Some other types of thumb rings (agate, emerald, and jade, in order)
Source: ehiding.co
As soon as the dragon bone thumb ring was brought up, Lin Shuo’s attitude turned cold and he stopped talking.
“Woman, you’ve heard too much!” said the starling after swallowing a bite of pastries.
“I’m sorry, so sorry,” said Anne as she bowed and apologized.
“It’s fine,” Lin Shuo waved his hand, “I am only telling you this to let you know that the creature might be stronger than you have imagined. I will do my best. I know you might be trying to establish authority for me that’s why you boast about my abilities to others. But I want you to know that you didn’t hire some sort of superior being and everything will naturally work out the way you have expected.
“I merely accepted the money for my assignment. I don’t need to be responsible for anyone’s lives. But you are not the same. Miss Anne, you are not just anyone. I trust that you know what I am saying.”
“I appreciate what you’ve said, Mr. Lin,” nodded Anne, taking his words seriously.
---
Everybody had a day’s rest at the Four Seasons Hotel.
Lin Shuo returned to his room for a nice, long sleep. He didn’t care what was going on outside.
The next morning, Anne woke him up using the phone inside the hotel and asked him to meet up at the hotel lobby.
When he arrived at the lobby, the entire team heading toward Heilongjiang was assembled.
Anne – the person in charge of ILRO’s Asian branch.
Wei Xingshan – captain of the Asian branch mobile unit along with Liu Qing, his vice captain, and 13 elite mercenaries.
There were also ILRO’s lead researcher, Professor He Zihong, along with his student Yang Ta.
All 18 of them with Lin Shuo being the mission leader mounted the tour bus arranged by Anne one by one and headed toward Chun Ning International Airport.
Destination of their flight: Northeast China. 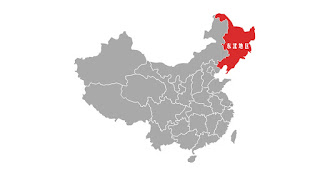