“Ugh…” Anne was speechless for a second but quickly added, “We have absolute faith in your ability, Mr. Lin.”
“Okay,” Lin Shuo nodded, “Since you have so much faith in me, I wouldn’t want to beat around the bush either. I’ll make an exception and come out of my retirement this one time, ten million dollars, live or dead.”
“Ten million!” Wei Xingshan cried out aloud before Anne could respond, “Buddy, are you insane?
I will have you know that even my elite mercenary group, three teams totally 15 in headcount signing our lives away only get ten million dollars in total!
We are essentially exchanging for this ten million RMB with our lives! And here you have to audacity to ask for ten million dollars just for yourself?”
Lin Shuo casted him a glance and said nonchalantly, “I am talking about USD.”
“What?!” Wei Xingshan looked as if he had been punched in the face. He face beet red and veins throbbing visibly in his neck.
He was about to say something else before Anne gave him another swift kick at the back of his knee, gesturing him to keep his mouth shut.
“That’s an amount greater than I am authorized to approve. Please wait a moment, Mr. Lin. Let me confer with my supervisor.” Said Anne calmly.
After that, she waved an apologetic gesture before she took her cellphone from her purse and walked outside of the house.
Wei Xingshan’s eyes widened as he looked at the back of the beauty.
Judging from her words, ten million dollar USD is negotiable?
Wei Xingshan was very distressed.
He had just joined the Global Lifeform Research Organization. Anne is his superior by name, but also his target of protection in this assignment.
From the pieces of information he was able to obtain on her, she wasn’t just any Harvard phD in biology.
Looking again at the bird on the desk, and the lanky, young village teacher who looked like he was in dire straits and straight up asked for ten million dollar.
Wei Xingshan had thought that him being a mercenary who’d risk his life would be the most abnormal one in the house and that the skill he possessed is the most valuable.
But now it looked like he couldn’t be more wrong.
While Wei Xingshan was still in a daze, Anne had finished her call and came back inside the house.
Smiling she said, “Mr. Lin, I have received my instructions. My superior was happy that we are able to hire you for that amount.
But we are a public service research facility after all and we have limited capital. How about this. Ten million dollar for the life sample, eight hundred thousand for the dead body. We will pay 3% upfront.”
“Are you seriously?” shrieked Wei Xingshan, “Higher up had agreed to that?!”
Anne ignored Wei Xingshan and bowed to Lin Shuo, “I thank Mr. Lin for your assistance for the Global Lifeform Research Organization.”
“You are welcome. That will work.” Lin Shou nodded and stood up, “I need to get ready.”
“No rush, we will wait.”
……
Lin Shuo walked to the back of the house and pushed open the door while the two looked on.
Outside was a small yard and a blue stone table top next to the door. On top was it was the cutting board and a cleaver. This was where Lin Shou prepared his meals normally.
On the other side of the courtyard was the principal room with a red painted door. Yet Lin Shuo didn’t normally live in there. 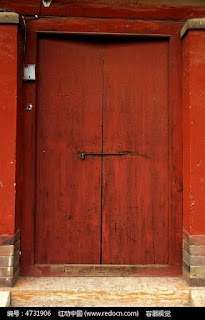 Red painted door
Photo credit: www.redocn.com
Inside the courtyard grown some vegetables, and five to six chickens pecking at the ground looking for food.
Lin Shuo bent over, reached out his arm, and grabbed a large rooster with a red comb.
The rooster fluttered its wings violently and wailed.
Lin Shou picked up his cleaver from the blue stone table in the courtyard and swung. The rooster’s flew into the vegetable field to the side.
A yellow dog dashed out from nowhere, picked up the head in his mouth and disappeared in no time.
Carrying the rooster’s body with blood still gushing out, Lin Shou walked straight to the principal room and pushed the door open without any hesitation.
All these transpired in barely two to three seconds. There were no wasteful moves between grabbing the chicken and killing the chicken. It was swift and efficient.
As Wai XIngshan watched his move, he felt a shiver ran down his spine but also baffled.
“What is he doing?” Uttered Wei Xingshan.
“Roosters’ blood is the strongest and most yang1 of all matters,” explained Anne lightly, “It’s the best offering for a weapon.”
“Offering to a weapon?”
“Lin’s, the family, worship an ancient weapon for 86 generations,” said Anne. “And Lin Shuo, is the 87th descendent of the Lin’s family.”
___
Note:
1.       Yang. Considered as strong, bright (sunny), and associated with male principal (taoism). As opposed to yin,  dim, soft, and associated with female principal (taoism).