In the dark forest with thick trees, the baby’s crying noise became louder and louder. Uncle Feng’s face turned a sickly pale. Quickly he pulled out a piccolo and blew out a short and sharp note.

Before Qin Luo could figured out what was going on, Chen Yun had already extinguished the fire with mud. And the rest of the group did the same. A few seconds later, there were no more lights at the camp ground, just the light from the moon shining on the empty space quietly.

After the fire had been extinguished, Chen Yun dragged Qin Luo with  her and hid behind a boulder. Feng Buping, on the other hand, hid behind a tent.

The soft touch from his hand stimulated Qin Luo’s adrenalin. He had never had a girl actively grabbed his hand in his entire life.

Unfortunately she let go of his hand quickly. Placing her hand on the hilt of the sword, she stared intently at the direction of the crying noises like she was staring at her worst enemy.

There were thirty something individuals at the camp site and not a peep could be heard. Everybody was hiding in some dark corners and even their breathing was light.

As the baby’s crying noises came closer and closer, a almost 4 meter tall giant figure finally could be seen at the edge of the woods.

Under the moonlight, Qin Luo could see the entire mysterious beast clearly. At first glance it had the appearances of an odd-looking eagle, with two long cow horns extending out from it’s head. A pair of tiny wings on it’s back that looked out of place on its body.

The odd-looking eagle walked toward the camp ground with giant steps as it continued to let out that baby’s crying voices that made one’s bones chill.

This was Qin Luo’s first time seeing a mysterious beast from Gan Yuan and didn’t find it frightening, more a feeling of novelty, even silliness!

With a low voice he asked Chen Yun next to him, “What kind of a mysterious beast is this?”

“This is a gu diao.” Her voice was barely auditable, mixed with indescribable fear, “It has a very bad temperament. Do not make any noises or actions that might agitate him, else none of us will survive!” 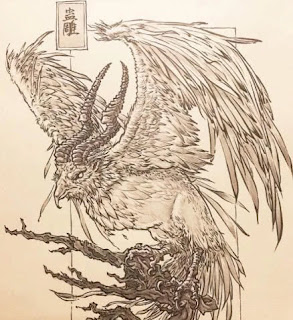 Qin Luo didn’t think much of it. These people were such cowards. Dozens of them and they didn’t date take on this gu diao?

If we were on earth, they would have been listed as endangered species from being hunted and eaten long time ago…

Gu diao walked straight to the camp ground and cocked its head as thought it was contemplating something.

“Is there a point in hiding like this? It looks to me it has already discovered we are here,” asked Qiu Luo, dumbfounded.

Chen Yun said softly, “It’s picking it’s food. It doesn’t have a very big appetite; it will leave as soon as it is full.”

Qiu Luo was completed stunned beyond words, when it is full?

Right at that moment, the gu diao started to move again. A peck behind a tent and it lifted a man with ease.

Qiu Luo could see clearly by the moonlight, it was a man around twenty or so years go. His face full of terror and desperation but he didn’t struggle or cry. With a sickly pale look, he let the gu diao threw him up in the air, and during the free fall of the body, it swallowed him whole with its giant beak!