Lin Shuo carried the bleeding rooster with him and pushed open the red painted door.
Ever since he moved here six years ago, he has been pushing open this wooden door on the 1st and 15th of every month.1
Chopping a rooster’s head off and offering the strongest and most yang chi to the item sitting on top of the incense table. 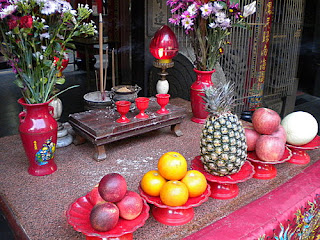 But today, today was neither the 1st nor the 15th. Today was June 20th, the year of jiashen.2
Or August 5th, 2004, according to the solar calendar.
There was blood all over the floor in front of the incense table.
Lifting his hand, he dripped the rooster’s blood into a white ceramic cup on top of the incense table. Tossing away the chicken corpse, he retrieved three incense from the incense table and lit them up with a match.
After waited for a little while, Lin Shuo first lifted up the cup passed his center of his brows, the spill the still unclogged blood in front of the incense table.
After he had completed the entire process, Lin Shuo lit another cigarette and took a few puffs. Among the spiraling smoke, he said, “Zhui ye, you had looked over me six years ago so I survived Mount Kunlun.
I have gotten news today. Not only did the bastard from Mount Kunlun survived, it had gone to Heilongjiang.
Why don’t you take a trip with me.
This monster, should not have survived.”
His voice was soft, it was as though he was merely talking to himself.
After he finished talking, he got down on his knees and kowtowed three times before getting up. He rummaged around behind the incense table and finally retrieved a black sash as wide as a palm.
The black sash wrapped around an ebony box. 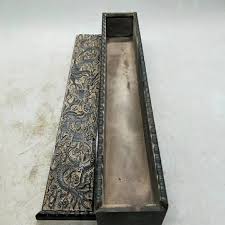 Ebony box
Photo credit: jszyzsgc.com
This ebony box was placed right behind the incense table. It was 3 meters long and 1 meter high. It’s size was enormous, almost looked like a coffin.
Lin Shuo bent over slightly, looping the black sash over his shoulder, he lugged the “coffin” onto his back and walked outside of the house.
Outside the house, after seeing the ebony box on Lin Shuo shoulder, Anne put her hands together and respectfully bowed at it. She quickly pulled Wei Xingshan out of the way so Lin Shuo and his ebony box could get pass.
“It’s all for show.” Grumbled Wei Xingshan disdainfully.
The starling flew over to the ebony box, pecked at it a couple of times, making a knocking sound before he said, “Zhui ye, how have you been?”
After greeting what was inside of the ebony box, the starling said to Lin Shuo, “Shuo ge, I am going to take a quick trip back to the forest. Since we don’t know how long this trip is going to be, I am going to tell my wives to get re-married. A couple of them have pretty strong personality, I wouldn’t want them to flew up against a cliff and kill themselves.”
“You go,” waved Lin Shuo with a helpless look.
Anne couldn’t help but laughed out loud. Then with a serious look, she gave the starling a thumbs up and said, “Ba ye, always the gentleman.”
“Women, are such trouble,” said the starling before he flew up into the sky.
After the starling was out of sight, Lin Shuo asked, “Which car am I taking?”
“Same one as me,” replied Anne.
Lin Shuo nodded and said, “Then please remove the back seat of that car.”
“Oh?” Wei Xingshan rolled his eyes, “Removed the backseat, why?”
“To place the box behind me.”
“Your box is well packed. Just tie it to the rack on the top of the car.” Wei Xingshan frowned and said, “We had quite a difficult time getting permits for the cars this trip. Every seat is taking. If we remove the backseat, where are my guys going to sit?”
Lin Shuo didn’t even bother lifting his eyes. He shook his head slightly and said, “I need to watch over this time.”
“I disagree,” insisted Wei Xingshan.
“Captain Wei,” said Miss Anne, “We will listen to Mr. Lin’s arrangement. Higher up had instructed us that Mr. Lin will be taking the lead as long as he joins us. We will follow his lead.”
Wei XIngshan remained silent for a little bit then said coldly to Anne, “You are the boss. Whatever you say.”
After saying that, Wei Xingshan made a gesture and all the other SUVs’ doors opened up and a dozen or so soldiers exited swiftly.
These soldiers stood neatly in a row in front of Wie Xingshan.
Lin Shuo was a bit surprised by what he saw.
He had quite a few encounters with mercenaries in the past. Most of them were veterans and not very disciplined. But this team of mercenaries seemed to be different.
“Everybody help out, let’s remove the back seat of this car,” ordered Wei Xingshan. “Whoever sitting here previously will have to squeeze into one of the other cars.”
In front of his team of mercenaries, Wei Xingshan seemed to have utmost obedience. Nobody utter a word of disagreement but quickly retrieved the tool box and started removing the backseat.
What was surprising was that the one overseeing the mercenaries and providing professional advices was a female soldier.
This female soldier was 1.7 meter tall (approx. 5 ft 5 in), short hair length to her ears. Quite attractive.
Noticing that Lin Shuo was observing the female soldier, Miss Anne introduced her immediately, “Her name is Liu Qing. She’s the vice captain of the Asia branch mobile team. She is also our technical equipment expert.”
All said and done, it was started to get dark.
There was a locust tree with thick foliage right smack in the center of the village not far from Lin Shou’s house.
Around 6 PM at night was when the villagers came out and chill under the tree.
___
Note:
1.       Referring to the Chinese lunar calendar here
2.       The twenty-first term of the Chinese sexagenary cycle. Source: https://en.wiktionary.org/wiki/%E7%94%B2%E7%94%B3