School of the Divine Condor!

Inside the Dean’s hall sat four associate deans and eighteen instructors, a total of twenty-three of them.

The dean sat on the master seat. He was already 300 years old, his long and white goatie already reaching to his chest, even his brows were also down to his chin. He was, after all 310 years old, several fold of a normal person’s life span. 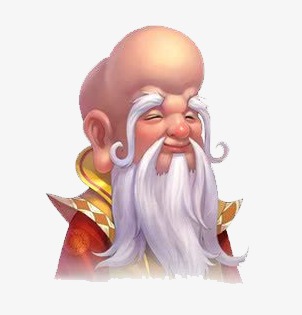 Photo: God of Longevity (sort of a comical depiction, but fits the description given by the author quite well J)

His foggy-looking eyes scanned across everybody there. Truth be told, none of these present were young. Even the youngest one there was close to 100, but he was still a youngster in the eyes of the dean nonetheless. The only ones there were close to his age were the four old men that cultivate behind closed doors perennially.

The dean of School of Divine Condor rarely got involved with actual matters concerning the school anymore. Most of the matters have been handled by the four associate deans with the assistance from the eighteen instructors.

This was the second time the dean had summoned everyone for a meeting within the last few months. This was almost unheard of in the past several years; normally nobody even saw the dean for a year or two at a time.

Now he had summoned everyone again. Naturally, the ones present could more or less figure out the purpose of the meeting.

“Associate dean Shen, why don’t you explain the situation to everyone here?” asked the dean nonchalantly.

Associate dean Shen dare not delay a second. He immediately cupped his hands at the dean and started recounting to everyone what had transpired at the Cheng’s.

If anyone from the Cheng’s was there right now, they’d recognize the man as the associate dean who brought his students to provide free labors for the Cheng’s.

He recounted all the events in great details; he neither cast their own as the “good guys” in the stories, nor did he exaggerate anything to make the Cheng’s out as evil people.

Nobody spoke a word after listening to his recounting of the events. As for whether the Cheng’s had gone too far, or that they asked for it themselves, they knew the answer in their minds.

Right now, whether they should go pick fight with the Cheng’s to preserve their face or just swallow their pride and let this one go, that was the question they wanted to consult the dean about.

If they were to go off of their normal set of principles, the reputation of the school was definitely the single most important thing. So theoretically, they’d go an make sure the wrongs have been right; and by that, they mean their face (reputation).

Associate Dean Shen was flattered and he quickly replied, “Dean, Cheng Biyuan was once a student of our school. In addition, Ning Xunzong and his lot had gone a bit far in this. The Cheng’s reaction wasn’t entirely unreasonable!”

The dean casted a glance at him. His look did not change much and still looking as indifferent as usual. As he scanned across the others in the room, they immediately felt a burning sensation on their face, as though they had been burned by fire.

“Anyone else has anything else to add?” The dean was as nonchalant as normal but his words gave everyone chills.

“Hrm,” hrmphed the dean when nobody responded. Everybody just felt as though a thunder had hit next to their years, “I have only been gone from running the matters of this school for a few years, little do I know that the students of our school had deteriorated so much. All the students that I have left to you had turned into robbers and bandits. How are you going to face all your predecessors of this school in the future?

“Do you still remember our guiding principles of benevolence, wisdom, propriety, truthfulness, music, loyalty, faith, heaven, earth, morality, and righteousness. Do you still remember their meanings? Why can’t I see a trace of them in our students? Do none of you possess these anymore?”