Returning to her room, she immediately entered her dimension to clean and disinfect her tools before putting them into her sterile medical tool box. She didn’t rush to go back out but headed toward her ten or so acres of herb field, picked a few common herbs, and started preparing them according to the method taught by her master.

Preparing herbs was no small feat, it entails methods such as steaming, boiling, stir-frying, baking, roasting, sauteing, fei’ing1, etc. Many a times, the herbs needed to be processed in order to increase its efficacy, decrease its toxicity and/or side effects.

With the Chinese asparagus she had collected, she peeled off its outer skin, slit it opened down the middle and removed its core. Then she steamed them for two hours with willow firewood, added some wine, and steamed them some more. After she was done with that, she took them out for sun drying and ready for using… 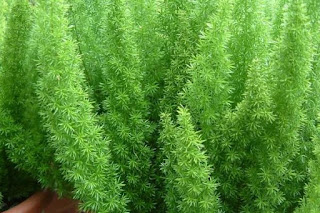 Picture: Chinese Asparagus
Source: zhifure.com
T/N: Could have swore I have seen these in my neighborhood. =D

As proven by fact, just knowing the method did not mean one could prepare good medicinal herbs. Gu Ye was not happy with her first few batches of Chinese asparagus. She has overly keen senses, she could tell the efficacy of the medicines just from its smell.

She finally prepared a batched of acceptable Chinese asparagus after five tries. She pinched off a small piece and chewed it in her mouth carefully before she spit out the dregs and rinsed her mouth. Alright! This should be good enough to pass her master’s examination.

“Mei mei, it’s time for dinner!” Since Gu Ye used studying medicinal herbs as an excuse, Gu Xiao and Gu Ming tried to disturb her as little as possible. Dinner was a joint effort between the two of them, Gu Xiao kneaded the dough and formed the biscuits and Gu Ming helped with starting the fire. Even though the biscuits were of all different thicknesses, but they were made out of white flour, so their tastes were alright.

Their dinner table and stove table have yet to be made, so the family just put a piece of plank on top of the stove as their make-shift dinner table. Biscuit soup with braised hare meat, this was much better food than what they had back at the Gu’s.

Even Gu Ye, who still has a weak stomach, was able to eat a large bowl of biscuit soup and had a few pieces of hare meat. One must know that they type of bowls they used were the ceramic ones that were bigger than one’s face. Gu Ye inadvertently overate and had to take some syrups to aid with her digestion.

Zhang Lihu also had dinner at the Gu’s. As Gu Ye had reassured him repeatedly that there would be no residual effect to his injury, Zhang Lihu was relieved and had a great appetite. He had two big bowls of biscuit soup and one bowl of hare meat. Gu Ye was very impressed by his appetite.

After dinner, Gu Ye went back over to her master’s room to learn more about preparing medicinal herbs. She started by showing him the Chinese asparagus that she had prepared.

The sage apothecary took the medicinal herbs from her, flipped it back and forth and examined it carefully. The more he looked the more contended he was. This disciple of his had only been learning from him for two days and had already grasped the essence of preparing medicinal herbs. Her techniques were still elementary, but he trusted that she would achieve great things in due time.

“Not bad, you have grasped the steaming process quite well. Now let’s move onto boiling…” The sage apothecary felt that his disciple was like a land that had droughts for too long. She could absorb almost everything he taught her. On the occasions that she couldn’t grasp it right away, she would first commit them to memory then slowly understand them through physical exercises.

Other than teaching her medicinal herb preparation, the sage apothecary also tested her on Gu Ye on her medical knowledge. The sage apothecary found it odd that even those Gu Ye possessed the technique of Hua Tuo, her basics in medical knowledge was almost non-existing. This included the most basics observation, auscultation and olfaction, inquiry, pulse feeling and palpation2. As odd as he felt, he had no choice but to cram basic Chinese medical knowledge with this disciple of his. Luckily she was a fast learner, otherwise he’d be bored to death in no time.

The sage apothecary was very curious who trained her in the secret techniques of Hua Tuo and how they were able to trained her to become such a amazing surgeon when she knew nothing about the basics?

1.      Grinding up the herbs with water into fine powder, add more water and stir, then take the finest dust floating on the surface of the water.