Can't get enough of Resplendent Apothecary? Advance chapter parts are now available on my Patreon site!!

Mrs. Wu was caught by surprise, she stuttered for a bit and said, “I…. I hit it with a rod… .that’s right! I hit the pheasant with a rod in my hand and broke its wing, which was why it wasn’t able to take off!”

A sly smile crossed Gu Ye’s face and she said, “If you have indeed hit it with a rod, the would be in the pattern of a stripe, but the pheasant in my brother’s hand has a round wound!”

“Ohhh? Oh! I was misspoke, I hit it with a rock. That’s right! With a rock!” Mrs. Wu backpaddled immediately while staring at Gu Ye with her beady eyes. This brat normally wouldn’t even dare to make eye contact with anyone. Whatever have happened to her?

Gu Ming took a step forward and blocked Mrs. Wu’s vicious look from Gu Ye. With a snicker he said, “Okay, then tell us what the rock looks like. Where did you strike the pheasant, and what shape was the rock, how big was it….”

“Ugh….” Mrs. Wu had no idea how to handle the string of non stop questions. Suddenly with an unpleasant look on her face, he unreasonable side showed, “Damn child, why are you asking so many questions ! Just hand it over!”

Who could reason with someone who’s so unreasonable? This woman wasn’t going to stick around and reason with them! Li Hao and Ninth Uncle’s Da Shuang and Xiao Shuang all ran out to block in front of her. Li Xiuniang broke away from the group and ran the other direction, calling out as she ran, “Grandpa! Mom! Dad! Mrs. Wu is trying to rob what’s ours!!”

Mrs. Wu had already received a warning from the village chief last time she failed to returned what she had borrowed to the owner. If it was confirmed that she was trying to take this from the kids, she didn’t even know what the old fart would do to them!

Her husband had malpracticed and caused a death, which was why they had to hide in this remote little village. If they were kicked out of here, they wouldn’t know where they could go, or whether they would be arrested by officials. Thinking of that, Mrs. Wu spit unreconciling and left with her herb basket.

After they have “warded off” the mean woman, all the kids rejoiced together. Gu Ye suggested, “Li’jie, why don’t you go and bring back a ceramic pot and some salt from home, we can have an outdoor barbeque!”

Gu Xiao Shuang, the youngest of them all, her eyes beamed. Even Li Xiuniang couldn’t help but swallowed hard thinking of barbeque pheasant. Yinggu, on the other hand, shook her head, “Xiao Ye’zi, your body is weak and need nourishment. Why don’t you take the pheasant home, soup is the best for your body.”

Li’jie and Li Hao both nodded forcefully to show that they agree with that suggestion.

“Li’jie, you know about what is going on in my family better than anyone else. How much do you think my brother and I will be able to eat if we take this home? Most of it will just go to Mrs. Gu and her two kids.”

Almost the entire village was aware of how Gu Ye was mistreated at home, so nobody utter another word after hearing that. Not to mention that for kids in the mountains when having meat was a big event that only happened a few times a year, a bowl of pheasant soup was a great temptation.

The kids talked into each other ears and all agreed that they couldn’t just eat Gu Ming and Gu Ye’s pheasant soup for free. So they all ran home and one of them grabbed a couple yams, another grabbed half a bowl of white noodles, another one grabbed an egg…. When Li’jie returned with the ceramic pot from home, there were already a small pile of ingredients on the ground. 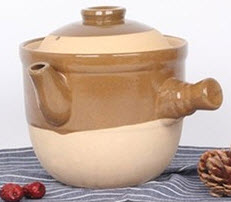 When Yinggu was cleaning up the pheasant, the rest of the kids sent to collect mushrooms by Gu Ye. She went ahead and dug out some more edible wild vegetables and also grabbed some angelica root and a codonopsis size of a finger. These were the essentials of a good pot of pheasant soup.

Shortly, a tasty smelling pot of pheasant and mushroom soup was done. Yinggu tore off a large piece of chicken drum stick for both Gu Ming and Gu Ye and the kids split the rest of the chicken. The soup was so fresh and tasty that everybody almost swallowed their tongues with it.

When the chicken and mushrooms were gone. They made dough drops in the soup and added in the egg and the wild vegetables. Then they dug out the yam that were now cooked in the in fire. All eight kids were stuffed to the brim! They have never had so much to eat, not even during new year time!