In the concealed area around the dried wood, she seemed to notice some mushroom with cloud-like pattern. If she wasn’t wrong, that was a purple ganoderma plant. The dried wood was located about ten or so meters from the ground. Gu Ye looked left and right before yanking free a vine from the wall next to her. She tugged at it a few times, it seemed it’d hold. 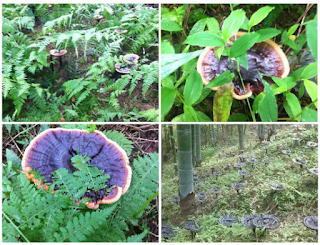 She wrapped a few of the vines together, tied it around a boulder and threw it at the dead tree. She tried three times before the vine finally caught onto the dead tree.

Gu Ye tugged at it a few more times and, speculated that it’d be able to hold her weight, she grabbed onto the vine, stepped onto the boulder and started climbing up.

Li’jie, who was still collecting hazelnuts, inadvertantly looked up and saw the dangling Gu Ye on the side of the mountain and almost screamed. Right then, Gu Ye had already reached the side of the dead tree. With one hand grabbing the tree branch, she picked the purple ganoderma plant.

The purple ganoderma plant was the size of a small child’s palm, the cap of the mushroom was intact. It’s consistency was even and of superb quality. She shoved the purple ganoderma into her chest and, right when she was about to climb back down, suddenly heard a light cracking sound coming from the root portion of the dead tree.

Damn! This dead tree had been weathered in the wind and sun on the cliff for too long and had already rotted out. It could no longer withstand Gu Ye’s weight and it’s starting to crack. Gu Ye tried to descend as quickly as she could on the vine but it was already too late. The dead tress tilted more and more and the rotted roots were already half cracked.

When Li’jie witnessed that, she dashed over as fast she could as she shouted out her name loudly, “Gu Ye’er!!!”

Gu Ming, hearing the scream, immediately look up and just in time to witness his sister falling off the cliff. His face turned pale and his eyes were about to bleed. Like a small animal that had gone insane, he sprinted in his sister’s direction at the fastest speed possible.

Li’jie’s desperate shrill startled a lonely silhouette on the cliff.  The man looked out and happened upon the scene with Gu Ye falling. The familiar name drove him to take a dive from the top of the cliff and, using the skills of Qianjin Zhui, he followed behind the small body.

Alas, time was almost running out!! The descend from the dozen of meters would only take the blink of an eye. The defined silhouette, in mid air, with startling speed tossed out a long vine straight toward the little girl who was just about to hit the ground…

Gu Ye was conscious during the entire fall and has been reaching out to grab anything within her reach: dried grass, tree branches, vines… unfortunately all they did was to barely slowly down the speed of her fall. She could do nothing but looked at the quickly approaching uneven boulders.

If Li’jie and Gu Ming wasn’t staring at her intently, she would have flashed into the dimension long time ago. She made up her mind that she would flash into the dimension at the very last minute and get back out instantaneously. Then just perhaps, maybe, nobody else would notice?

Right when she was at arm’s length to the ground and right before she was about to flash into the dimension, she suddenly felt a tightness around her waist that almost squished all her breakfast out. Aiyowei, her back! Did it break into halves?

Gu Ye felt that she was being hung. She was swaying in midair, the grasses on the ground brushing up against her cheek. Her nose was just a few millimeters from the ground. Her face was almost scratched up. Who was it? Barging into something that didn’t concern them. Their help almost got her killed!!