Ask and you shall receive, they say. And who am I to argue with what's in the Bible? I asked, and my readers answered, way exceeded my expectation if I may add. I was thinking about 4 - 7 responses, and those who speak up will decide the fate of the mass, but noooo, I got a total of 40 responses! And I must say that I was genuinely surprised by the result. I felt for sure that English readers would certainly prefer (somewhat meaningful) English name to pingyin, but I couldn't be more wrong. 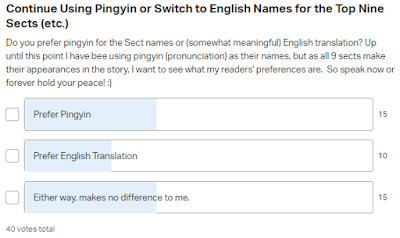 I have, however, seen some interesting comments. Some readers (alleged ex-reader) asked if I was going to translate character names into English. That would just be odd... why would I do that? What I had in mind were more organization names similar to "Green Mountain Manor". Specifically in this case, I was referring to the 9 top sects.

These were what I was talking about:

But all my lovely readers just voted to make my life easier by choosing pingyin. :) I want to see if I can push my luck and have a second poll about the reason behind your vote, now that I have hopefully clarified some more on what I meant. Follow this link to vote: Poll #2.
- July 14, 2019