The fall season painted all the mountains a layer of gold. The setting sun making the fall leaves even more colorful than they already were. Inside the small courtyard, the ground were covered in gold color.

A screeching noise broke the silence in the small yard, “Stop lying in bed like a corpse! Just because you had lied around, did nothing, and ate well for a few days do not make you Miss High and Mighty! There are so much to do around the house, so stop with the lazing around in bed! Are you dead yet? If you are not dead then get up on your ass and start cooking!”

Gu Ye opened her eyes slowly. There was no point in even sighing. She sat up and started to get dressed. It had been five days since she was brought back from the mountain by the clan members. She had been woken up by Mrs. Liu’s screaming and shouting in the last few days. She must admit that she had very strong desire to poison her so she could never speak again.

After resting in bed for five days and drinking all the nourishing potion and eating nutritious food, Gu Ye’s body was recovering slowly. She was still shockingly emaciated, but her felt better and better as each day passed by, and she had regained some energy.

Seeing that Gu Ye listened to her and left her room, Mrs. Liu smiled triumphantly and said, “The pig food was ready, don’t forget to feed the pigs. After lunch was prepared, bring them to the field, don’t slack!”

After she finished talking, she gave Gu Ye a stare before leaving with her hoe. This was the busiest time of harvesting. Every capable body in the village was helping out in the field. In the past year, the original owner was part of the labor force as well; but this year, courtesy of the broken body, she only need to take care of the household chores.

Gu Ye slowly retrieved toothbrush and toothpaste from the dimension before she brushed her teeth and washed her face. She then combed out her dried hair and braided them into two braids. She went to the courtyard and stretched her shoulders, kicked her feet, and did a set of physical exercises before she hopped into the kitchen.

The kitchen was quite clean and the food and ingredients for today’s lunch were already placed on the countertop. In order to have the energy for the fall harvest, the number of meals in this household had increased from 2 a day to 3 a day. Naturally, the “garbage” who couldn’t help with the harvest was not entitled to breakfast.

At this point in time the quality of every family’s meals had gone up – at least a little meat everyday to ensure that they would have the energy for the harvest. On top of the kitchen counter was a piece of blackened preserved pork sliced into 7 – 8 slices, a handful of beans, two eggplants, and a bowl full of noodles of two different thickness…. This was the entire meal for the family of six.

Gu Ye rubbed her rumbling tummy; she didn’t want to have any more tasteless nourishment fluid anymore. She brought over the stool and fetched half a bowl of plain flour from the basket hanging on the kitchen beam. She then dug out Mrs. Liu’s hidden ceramic can and took out an egg. Along with a few slices of spinaches, she made herself a steaming bowl of dough drop and vegetable soup with egg. The soup warmed her stomach.

Luckily the original owner had alright skills in the kitchen area. In her pass life, she could burn the kitchen down trying to make porridge!

She fed the two pigs and six chickens in the backyard. After feeding the fouls and the livestock, Gu Ye started preparing lunch. She used one of the stove to cook the porridge and another one to braise the pork with beans and eggplants. Biscuits were heated up on the rim of the pots – this was how the original owner used to prepare the meals.

She found some seasonings from dimension and added some allspice and some chicken essence. She had no idea whether she had added the proper amount but at least it’d beat the plain-cooked meal. She grabbed out a bowl of pickled vegetable from the pickle bowl and minced them. She also fried up some salted vegetables and completed her assignment to prepare lunch. 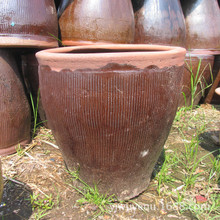 Picture: Pickling vegetables consists of placing a having rock on top of the vegetables (cabbage, in this case)
Source: haocai777.com 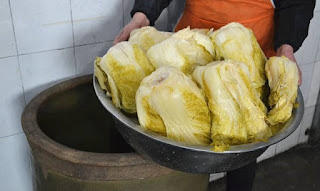 
Looking at the barely presentable meal Gu Ye nonetheless felt a sense of accomplishment. This was the very first time she had prepared a meal on her own, and the kitchen was still intact! She wanted to show the dang ice cube her masterpiece and see if he’d still call her a kitchen idiot!
___

Frantically working on bringing you the next part!

If you haven't already done so, remember to rate this book and add it to your reading list on NovelUpdates.com if you enjoy this story! :)