When Gu Ye returned home with the firewood, their courtyard was crowded with people. The Gu’s clan leader was there along with a few elders in the clan. With the exception of one unfamiliar old man, the rest of the folks standing in the courtyard were villagers of Qingshan that she was familiar with.

It wasn’t exactly correct to call him old; he wasn’t exactly old and decrepit. He was perhaps around 40 or so. He was a tall man. He only had to stand there casually and he exuded the commanding air uniquely belonging to someone in the military. His hair was grey and his beard messy. He had on a set of old clothes and in his hand was his belongings wrapped in cloth. In his other hand was a cane that supported his weight. 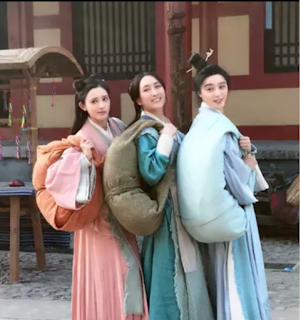 Picture: cloth wrapper (who’d have thought a good picture of a good cloth wrapped was so hard to find!!)
Source: dealmoon.com

“Xiao Qi (“little seventh”), what do you mean? Are you denouncing me as your father?” The man’s voice was strong and full of live. His look solemn. His round eyes resembled those belonging to a tiger and stroke fear into those who saw them.

“That… Fifth Uncle. It wasn’t about denouncing or not denouncing. My parents only said it verbally back them, we never edited our genealogy, so it wasn’t really a true adoption,” said Gu Qiao as he secretly judged this distance relative of his. He scanned through his old and torn clothes and finally stopped on his cane.

When he came in earlier, he was limping and his movements restricted. Nobody knew how he was able to travel 100 miles in the mountain to get to where they were. Their family was already having a difficult time, he couldn’t possibly take on another burden. As far as the adoption went, barely anyone knew about it; as long as he didn’t admit to it, there’s not much he could do about it.

“I see how it was, Xiao Qi!” Gu Xiao wasn’t surprised by this outcome at all. He snickered, “Back then when our country was being invaded and the government was drafting soldiers, each family with two boys must send one into the military. I was the last one left in my branch, normally I would not be drafted at all. Your branch had your dad and his older brought. The older son needs to prop up the family so your dad would be the one to be drafted. He was a coward and groveled for me to take his place. He said he had three young kids at home and his family needed him. And that I was single and had no ties. And that if I’d join the military in his place, he’d let you be my adopted son! Well, are you denying it all now?”

“Fifth Uncle, I was barely five years old when you joined the military. How much could I recall? My dad had passed away many years ago, and I have never heard him brought this up before. How could I honor this?” Gu Qiao smiled bitterly and avoided eye contact with Gu Xiao.

“Liao Qi (“old seventh”), I knew about this! Back then Xiao di (“younger brother”) had to leave in a hurry so there wasn’t enough time to make it all official. But your father had indeed promised you to be his adopted son!” The clan leader chimed in to set the records straight.

Gu Xiao, if everything was to detailed out, would be considered a distant relative to the Gu’s clan. He was less than ten years old when his mother brought him back there. She passed away shortly after that leaving him behind to hunt for a living relying solely on his brute force. When he was 18, the government came drafting for soldiers and he went in the place of Gu Qiao’s father. He was gone for a total of 25 years. In these years, the Gu’s had never heard a word from him; they had all thought he had died in the field!

Mrs. Gu’s eyes rolled in their sockets and when she caught sight of Gu Ming, her eyes beamed. She smiled and said, “Fifth Uncle, aren’t you worried that your branch will end with you? You are right that it wasn’t a big deal that we be considered your children. But most people would prefer to adopt young kids. You know, you have more time to spend with them and form that bond, right? My husband is already 30, he’d be a laughing stock to be adopted at his age!”