Gu Ye went back into her own room and returned with an very-ancient-looking book that was written by hand and had already turned yellow from age. The book contained both illustrations and detailed descriptions of over 1,800 types of herbs, their medicinal characteristics, efficacies, and utilities. On the old covered scribbled four strong characters – The Compendium of Materia Medica (or in layman terms – “The Encyclopedia of Chinese Herbs”). It was obvious that it’s one of her antique collection from her previous life.

As the saying goes: “Gold for Apocalypse; Antique for Good Times”. In her past life, even though the human population had dwindled to 1/10 of what it was, she still held on to the believe that a post-apocalyptic time would come and peace would be restored. That’s why she would sell her medicines for gold, but also collected antiques that were abandoned by others. She had a special spot for specifically for ancient books and paintings; they took up quite a bit of room in her dimension, even. And this Compendium of Materia Medica was part of her collection. 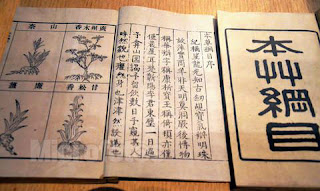 She didn’t think that after the sage apothecary saw the Compendium of Materia Medica, he was so emotional that tears were about to run down his cheeks. With shaking hands, he took the book from her with utmost respect and carefully flipped through a few pages of it. Once he was able to determine it’s authenticity, he acted as though he had seen the best treasure in the world. With trembling voice, he said to Gu Ye, “This was the herbal encyclopedia from Master Li that had been lost ages ago! How… how did you come across this priceless treasure?”

“Ugh… this was from my mother. She said she give some biscuit to a beggar who was about to die from starvation and the old beggar handed her this book that he said was passed down in his family. All my knowledge on herbs came from this book. Master, is this…. really a very precious book?” Gu Ye didn’t expect the Compendium of Materia Medica to also exist in this world.

From her grandfather, she had learned that this was a country and an era that did not exist in her history. The world was dictated by three equally powerful countries, they were Yian, Sen, and Chongwu, each of them having dozens of vassal states. And Dongling, where they were currently, was one of Yian’s vassal states.

There were theories of parallel universe in her previous life; perhaps she was sucked into a parallel universe right at the moment that she died and arrived at a time and place that did not exist in her history. She did not, however, expect this Compendium of Materia Medica was so sought after here.

“It not only precious. To an apothecary like us, this was practically priceless. Look, my disciple, it didn’t only record the herbs’ physical appearances, their origins, the method of collecting and preparation, it had also detailed description of their smell, taste, utilities, method of consumption, and interaction with other herbs, etc. Look at these prescriptions that was included at the back of the book… having these, as long as one is not an idiot, given enough time any one could become one of the top 5 master apothecaries in the world!” The sage apothecary got more and more excited as he talked and was just short of putting the book up on a podium and bowed down to it.

The sage apothecary gave her a stare as though she was the most unappreciative person on earth. His old face turned beet red and his pitch heightened, “Oh, you child, how are you so unappreciative? Do you know what it meant to be in possession of this book?”

“Master, you are overreacting. We don’t want to elevate your blood pressure and bring about a stroke. C’mon, follow me, breeeeaath iiin… breeeaaathhh ooooout…. Breeaaattth innnn… breeaatthhh ooooutt…” Gu Ye was genuinely worried that he’d have a stroke just from this. Surely, she has medicines that could stabilize his blood pressure, but how’d she explain it away after she had produced it?

The sage apothecary followed her rhythm breathed in and out with her a few times and started to calm down a bit. Looking at her nonchalant look, he felt defeated and asked, “Disciple, are you listening to what I am saying at all?”