For their own safety, Cheng Xiao Xiao decided not to exposer the secret of her dimension. Once the decision was made, Cheng Xiao Xiao looked up slowly and apologetically at them and said, “Abbess, I thought about it for a while and really couldn’t figure out what it was. I am not what else we can do at this point!”

The two of them exchanged a look; it was a hard to swallow answer. After all, they came a long ways to seek an answer, but ended up with nothing.

Luckily, they were a monk and a nun, and they didn’t lose it right away. Contrarily, the two of them went into deep thoughts.

They couldn’t help but remembered Elder Ying’s words – if you want to breakthrough to become martial monarch, you must join the Cheng’s clan. Could that really be the reason?

At that moment in time, the two belonging to the Nine Top Sects felt very hesitant. They were too prideful to be someone’s servant, let along the senior elders in the sect!

Cheng Xiao Xiao did not elaborate any more. Since she had already made up her mind, she had no reason to say anything anymore. The only thing she didn’t know was the hint that was given by Elder Ying previously.

Cheng Xiao Xiao felt very relieved after their departure. She was quite worried that they would be persistent and squat there; then she really wouldn’t know what to do with them.

She returned to her kiosk located in the entrance of her Yuteng Pavillion and immediately found Mo Xuanzun there carving at something with a small knife.

That piqued Cheng Xiao Xiao’s interest right away and she couldn’t help but to walk over there. The one who heard her arrival didn’t even look up but just said, “Xiao Xiao, give me a few more minutes, I am almost done!”

“Oh? What is it?” asked Cheng Xiao Xiao as she walked over to him. She saw that he has a piece of white jade (“sheep fat jade”) in his left hand and a dagger gleaming with cold light dancing in his right. She couldn’t tell what he was doing. 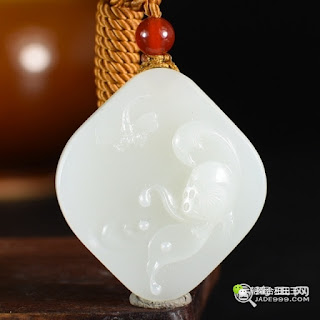 After she was standing behind him, she could finally tell that the white jade in his hand was carved into a statue. And the most surprised part was that the statue was her. She was immediately fond of it.

In order to not distract him, she walked over to one side and sat down. She couldn’t help but thought how he had been following her around shamelessly the last few days. Albeit he could be annoying to have around, but now she was antsy without behind around him.

Was that what you call a habit?

She has heard of feelings that derived strictly from a form of habit!

After a long while, he finally stopped what he was doing. Looking at the little human statue in his hand, he smiled contently. He scrubbed the statue gently with the sleeve of his white robe as if it was some sort of treasure.

Cheng Xiao Xiao, sitting and leaning against the side of the kiosk, witnessed all that. She faked an annoyed look and said, “Show it to me. What did you carve?”

“It’s my baby….” Replied Mo Xuanzun as he burst into a smile after cleaning up the jade statue. As though offering up some sort of a treasure, he handed it over to her, “Take a look, Xiao Xiao, and let me know if you like it!”

The smooth jade with a slight chill to the touch felt very nice in her hand; it was obviously a jade of good quality. She took a closer look and, sure enough, it was a statue of her. It was very lively and detailed, even her brows was very defined. It was obvious that the tool was quite handy with his hand.

The smiling Cheng Xiao Xiao nodded and with a flirtatious look, she said, “Who said you can crave me? This is an infringement on my portrait right, you know that? I am confiscating this!”

“What confiscating, Xiao Xiao? It was meant to be a gift to you to begin with!” said the grinning Mo Xuanzun.