“Alright, grandpa, you let me handle this. Don’t worry about it, I am going to entertain my two school friends now!”  Ning Xunzong interrupted his grandfather impatiently. He stood up and started leaving the room as he said to himself, “Some simple village girl wants to marry me? What a joke! Hrm!”

Old man Ning heard his words and frowned. He opened his mouth as though he was going to say something, but finally didn’t make a sound.

Cheng Xiao Xiao passed over two hill tops before she arrived in front over 10 tea leave trees. It wasn’t exactly a carpet or a sea of green, but there were many crooked branch from these trees growing in all directions. The leaves were elliptical in shape, thick and wide, a bright green that made them looked like oil was about to drip from them.

The flat top of the trees were covered with new, elliptical leaves. They had serrated edges and fresh like new born infants. The bright, green pointy leaves just waiting to be picked. 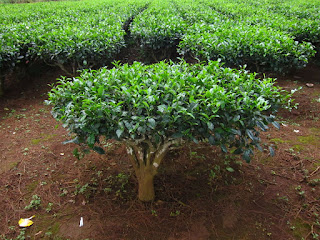 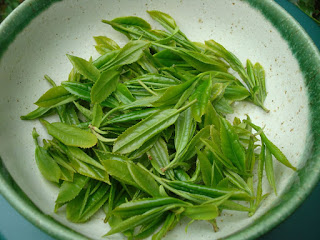 
Walking up to them a hint of tea fragrance filled the air. Tea trees (also known as
“tea plants” or “tea shrubs”) belong to the Theaceae family and Camellia genus and is a species of ever green shrub. Tea trees loves warm and humid climate and prefers bright filtered light; they grow well under direct sunlight. They have four different development stages: bud, seedling, mature plant, aged plant.

Cheng Xiao Xiao knew that they could be divided into spring and autumn seasons. Tea made from leaves picked in the spring time were called spring tea, tea from leaves picked in autumn time were called autumn tea. In later days these were mass grown for their leaves, but back in these days people still picked them from the mountains, that’s why they were very expensive.

Standing next to the tree plants, Xiao Xiao asked the little fairy, “Yuteng, if we transplant all these trees into the dimension, can we have tea leaves throughout the year?”

“Hehe, young master, why don’t we transplant them and find out?  In addition to four seasons a year, the time in the dimension is accelerated1, you can have as much tea leaves as you want!”

“Wonderful. That’s great, and we will be able to sell them too!”

Cheng Xiao Xiao nodded and smiled, “Yuteng, transplant them quickly. Then we can search for more! The more the better!”

“Surely!” Yuteng responded and with one wave of her small hand, all the tea plants in front of them disappeared like they were never there.

After she had collected those, Cheng Xiao Xiao went looking for more tea plants as it was still light out.

Back of the Cheng’s house!

Cheng Biyuan brought back four villagers and they all lined up to get water from the well, then bring them one bucket at a time to the bamboo forest and poured them onto the bamboo roots. They were all working very hard.

The villagers had no idea what was the reasoning behind this, but they were promised one liter of rice a day so they didn’t care what the reason was, they just knew to work hard.

It was almost festive outside the bamboo forest, the two trapped inside the bamboo forest were miserable. They couldn’t see their surrounding clearly in the moonlight, but in board daylight, when they realized the situation that they were in, they wanted to bang their heads against a wall.

The first thing out of the shivering Deacon Lin’s mouth was, “What do we do?”

Note:
1. If time was accelerated inside the dimension, Cheng Xiao Xiao should age faster each time she went inside. XD