To My Dear Readers:

It'd appear that my Adsense is working again. Yay!

As such I'd like to again ask you to please refrain from "helping" me by clicking on the ads excessively and help me avoid my account from being labeled with "illegal traffic".


“Tsk! What’s the big deal?” As far as apothecary skills go, Gu Ye knew she was as good as anyone else. The only problem was that the potions and powder that she had developed didn’t belong to this world, so she couldn’t produce and use them.

“Eh?” Anyone else would come rushing over covered in tears of joy with those words. This girl had nothing but a look of contempt. That was unexpected!

“So you are a sage apothecary just because you said so? Anyone can say that. And I am telling you that I am a miracle healer!” Gu Ye still felt that his appearance right here was very odd; naturally she wouldn’t just take his words for it.

“Who’s your disciple? What is master and disciple with you?” Gu Ye rolled her eyes. Shouldn’t a sage apothecary be otherworldly, sanctimonious, and enigmatic? Then why was this old man in front of her acted just like a old big kid and didn’t exude a shred of seriousness? Was he a fake?

The sage apothecary seemed to have read her mind. He struggled to get up and limbed a couple steps toward her before he said to her, “Okay, so you don’t believe me, right? Take a look at this huang jing (no English translation) made from my very own secret recipe. You won’t find a second place that can produce huang jing that are as effective as mine!” That darn kid Yin Mei, he kicked me for real! My ankle was swollen for sure! 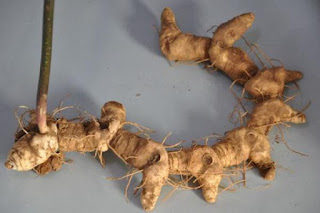 The sage apothecary was quite proud of his apothecary skills. One must know that the medicines that he made were well sought after in the market; sometimes one couldn’t even buy them even if they were willing to pay top dollars for them. Medicines made by a good apothecary could retain all of its efficacies and the results could be witnessed by all

Gu Ye reached over and took the pack of huang jing from him. She picked up a small slice, put it in her mouth and chewed before spitting it back out and said, “What secret recipe? That’s just your everyday ‘9 steam and 9 dried’ method. Everybody on earth knew that!”

The sage apothecary’s eyes widened and he looked bewildered. Stuttering, he said, “How… how you do know about my secret recipe? I haven’t even taught that to your First Shi Xiong yet! And what is this “earth” you speak of? Are all earthlings master apothecaries?”

“Ugh… I haven’t said I will take you as my master yet, how would I have a First Shi Xiong?” Gu Ye shoved the huang jing back into the old man’s chest, turned around, picked up her own medicine basket and was about to walk away.

“Wait… little girl! Don’t go!” The sage apothecary wanted to chase after her, but the injury on his feet was too painful. He almost fell and sustained even more injury.

Since he wasn’t going to be able to catch up to her, he decided against chasing after her. He plopped down on the ground and shouted out loudly, “Little girl, I was only going to make an exception and take you as my last disciple because you seemed to have talents in this area and the foundation of recognizing herbs. You better think twice about this, the disciple of the sage apothecary could walk sideways anywhere in the world of apothecary and will be well respected by all. Even the wealthy and nobles will be respectful to a master apothecary….”

Not too far from them, Yin Mei and Yin Ba exchanged a look. They never expected there would exist someone who’d decline the opportunity to be the disciple of the sage apothecary. If it was anyone else, just a few pointers from the sage apothecary would be beneficial to them for life. Yet this girl was just throwing this golden opportunity out the window. If others find out, she would no doubt be drowned in spit!

Suddenly a great idea occurred to Gu Ye and she slowed down in her walk. Oh right! This would be the perfect excuse for her! As long as she could find good explanation for the source and products of her own apothecary skills, why did it matter if he was truly a sage apothecary or not? She had nothing to use!