Walking and pondering at the same time, she wandered further and further away from home and onto a path to the back of the mountain.

She figured any precious items would be further into the mountain, so she headed subconsciously toward the back of the mountain.

To get to the back of the mountain, she’d need to walk pass a bamboo forest. A breeze brought over a faint smell of fresh bamboo, Cheng Xiao Xiao couldn’t help but looked up. An entire mountain of green bamboo, slender, tall, and elegant, wavering slightly in the wind. Their leaves vibrating rhythmically in the wind like nature’s melody.

At this moment in time, what she felt was pure exhilaration. All her worries had dissipated along with her fatigue. Inside her heart was a pure and cool world.

Bamboo could be seen all over in the countryside. Not only do they look pretty, their leaves, juice, fruits, fungus, bark, root, and shoots could all be used as herbs. Most people were aware that bamboo shoots were very edible.

She wondered if she should transplant bamboo shoots into the dimension.

Once she thought of this, she got to work right away. Couldn’t hurt, so might as well give it a try.

At a moist area, she discovered a few bamboo shoots. She didn’t have a hoe with her, so she collected a few sturdier bamboo branches and directly used them to dug out the bamboo shoots.

After lots of effort and dripping in sweat, Cheng Xiao Xiao was able to dug out two bamboo shoots and moved them into the dimension.

Cheng Xiao Xiao, who had just entered the dimension heard the system voice right away. She was taken aback a little. Wiping off some of her sweat on her forehead, she smiled bitterly, “Just level 2? That will take forever to get to level 50!”

“Well, guess I should be glad I leveled up at all. Look like I will have to keep looking for new species to transplant!”

She rested for a little bit, didn’t bother to go see where the bamboo shoots were placed and left the dimension. She left the bamboo forest and wanted to keep looking before it gets dark.

She started looking around the foothills!

No reason to try transplanting commonly-seen species. After all, the dimension already had a pretty large collection.

Perhaps it was too close to home, after searching for a half a day, she did not find anything worthwhile to be transplanted. She leaned against a pine tree and sighed.

Did she just wasted all that time?

It looked to be around 3 – 5 PM, she needed to head back home or it would get unsafe!

She wasn’t happy but she was about to turn around and make another trip tomorrow. After all, it would take a bit of time to get up to level 50.

She was just about to turn around when she heard a strange noise. She had a bad feeling, it sounded like something was coming toward her.

She grew up in a village. She has instinct in these matters. She looked toward the direction where the noise came from.

Once she was able to locate the origin of the noise, she had goose bumps and felt all her hairs stood on their ends.

A snake several meters long appeared in front of her. 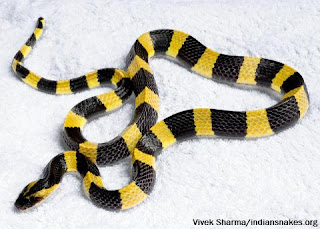 It got it’s name from the gold-ring like scales. Top 3 snakes in China, extremely poisonous!

Why was it here?

Cheng Xiao Xiao recognized the snake. Even though it’s extremely poisonous, but it’s photo-sensitive. Normally it curls up with its head under it’s belly the day time. It has a mild temperament and slow in motion, doesn’t usually go after people. It’s only active in the night time when they hunt!

This one almost looked like it was targeting her intentionally!