Cheng Zheng Yuan had no doubts in his mind. He believed in Cheng Xiao Xiao’s words. Snow ginseng in hand, he centered his focus to absorb the essence of the snow ginseng into his body. Cheng Xiao Xiao stood not too far away and smiled and watched him. 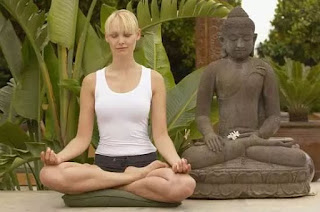 Five Heart Upward meditation pose (5 “hearts” being top of the head, both palms, and the bottom of the feet)
Photo credit: freewechat.com

In the next instance, the essence inside the wild ginseng turned into thin spiritual streaks. These streaks entered Cheng Zheng Yuan’s body through his left hand and, with lightning speed, entered into his blood vessels and being absorbed into his blood.

A cloud of spiritual air slowly surrounded Cheng Zheng Yuan. Cheng Xiao Xiao smiled at the scene in front of her, and excited anticipation could be seen in her eyes.

Cheng Zheng Yuan’s mouth opened and a white streak of spiritual air shoot out like an arrow seven, eight feet away.

A crisp sound, a bamboo cracked in the middle and the top half fell. Cheng Xiao Xiao was shocked.

The next moment, Cheng Zheng Yuan opened his eyes and gave a big smile.

The joints on Cheng Zheng Yuan’s body rattled loudly. With a slight jump, Cheng Zheng Yuan stood in the middle of the bamboo forest. Cheng Xiao Xiao felt that he was, indeed, appeared different. Happily, she asked, “Zheng Yuan, how do you feel now? Did you breakthrough to martial apprentice?”

Cheng Zheng Yuan smiled, balled one palm into a fist and punched.

A loud explosion in the air, an area in the bamboo forest was affected by his power and the bamboos rattled violently; a few broke in the middle. He had certainly became much more powerful.

“Zheng Yuan, congratulation! That was incredible!” Cheng Xiao Xiao smiled and walked up to him, “Dad would be so happy when he found out that you have achieved martial apprentice!”

“Indeed!” Cheng Zheng Yuan looked very happy. The next minute, he took a deep breath, with a determined look he announced slowly, “Big sister, I am just a martial apprentice. That is nothing. I will continue to focus on cultivating and improving myself!”

“Zheng Yuan, your big sister will be very supportive of that. I am sure you will make the rank of elite martial artist in no time!” Cheng Xiao Xiao felt genuinely happy for her brother, especially the fact that he wasn’t arrogant about his success. He was someone who was down to earth, and was destined for big accomplishments.

Needless to say, Cheng Biyuan was ecstatic when he found out that his oldest son has achieved martial apprentice. His thunderous laughter echoed in the air.

The whole family laughed, the two younger ones looked at their older brother with admiration. Especially little brother Zheng Bin, who pestered his older brother insistently to teach him to cultivate. Cheng Zheng Yuan promised he would teach him and the young ones had been cultivated daily in the bamboo forest.

“Yuteng, is there anyway you can convert the bamboo forest a little bit? Say, turn it into a sacred location for cultivation. What do you say?” Cheng Xiao Xiao’s eyes beamed, she want to establish a sacred place.

Little Yuteng, who was sitting on the crystal tree, cupped her cheeks in her palms. Her eyes sparkled like stars in night sky. Slowly, she said, “Young master, there is such a possibility, but I can’t make any promises. We can try to water the bamboos using the water from our well in the dimension every night. Perhaps overtime the bamboo will absorb the spiritual air and grow into spiritual bamboos.”

“Really, Yuteng, you think that will work?” Cheng Xiao Xiao was happy and hopeful.

Little Yuteng smiled and said, “I think so, young master. You can have your family irrigate the bamboo at their roots whenever they have the time. Even though the well outside was a clone, but it is still effective. Over time, and on top of me using water from the dimension nightly, I’m sure we can convert the bamboos into spiritual bamboos!”