Early in the morning, Cheng Xiao Xiao was woken up by some noises coming from their yard and it sounded like Zheng Yuan. She was curious what was going on outside.

She pulled the blanket over the sister before she put on a jacket and went outside. She found Zheng Yuan practicing the horse stand squat in the backyard and next to him was none other than their own mother! 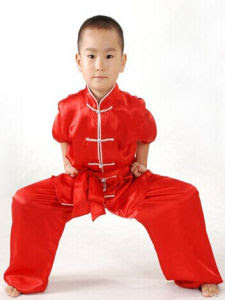 What was going on?

She paused for a bit and approached the two. Baffled, she asked, “Mom, Zheng Yuan is practicing martial art?”

“Yes, Zheng Yuan has been too lazy so I had to watch over him.” Said Mrs. Cheng gently, “Since you are up, you can watch him for me, and I can go prepare breakfast!”

Sitting down in the yard, Cheng Xiao Xiao rubbed her eyes. She looked at the brother who was squatting in the yard motionlessly and was quite impressed. He had a solemn look, his thighs spread at a 15-degree angle, same width as his shoulders; both feet pointing forward, center of gravity moved downward; both feet spread of two to three feet apart, both arms went from a circular formation to palm down, much like what martial artists look like in the kung fu movies she had seen in the past.

She was very curious about the background of this family.

Normal farmers didn’t teach their kids to read and practice martial arts. Without any memory of her “past”, she has been wondering about this. She could tell her parents didn’t come across as regular villagers, nor did her siblings look like they grew up in a remote village. Now that she had seen her parents teaching her siblings reading and martial art, she wondered if all these have something to do with her father’s injury?

She pondered for quite a while, but couldn’t figure out anything.

After breakfast the next morning, Cheng Xiao Xiao was just about to take her brother Zheng Yuan up into the mountains. After all, if she wanted to level up the dimension, she’d need to find and collect more precious items into the dimension. She didn’t expect visitors at her front door.

“Xiao Xiao, you and Zheng Yuan going up the mountain?”

The slightly hoarse voice carried a hint of nervousness. The owner of this voice was Liu Danhang, a resident of Willow Village. He was about 17 year old. A slight blush was visible on his still slightly childish and honest face. He looked both of longing and infatuation.

The corner of Cheng Xiao Xiao’s mouth twitched a bit. She was wordless. It was obvious that this boy was fond of the original Cheng Xiao Xiao, but without the memories between the two of them, she didn’t have too much fondness toward him.

She didn’t respond to him right away. Zheng Yuan, who was standing nearby, tugged at her sleeve, “Big sister, if Danhang ge1 accompany us into the mountain, we won’t have to be worried about running into dangers!”

Suddenly remembering her previous encounter with the banded krait, Cheng Xiao Xiao nodded slightly, then turned and led the way.

Liu Danhang recovered after a slight pause. A happy smile spread on his plain face. He quickly followed behind Cheng Xiao Xiao and her brother.

“Big sister, are we going to gather firewood or herb first?” Zheng Yuan knew that they were there to gather herbs for their father, so he decided to ask her for her decision first.

After trekking through an entire mountain, Cheng Xiao Xiao was exhausted and taking a break in a shadow of a tree. Liu Danhang was not far away, but he didn’t catch up to chat with the two of them.

Wiping her sweat away, Cheng Xiao Xiao took a look around and replied, “We still have quite a bit of firewood left at home. Let’s go gather some herbs!”

Liu Danhang noticed the two of them continuing on, he resumed follow them after a slight hesitation.

“Big sister, is this an herb?”

“Big sister, what’s the name of this? What kind of effects does it have?”

“Big sister, why does this herb have so much spines?”

“Big sister, how much longer are we going to be gathering herbs!”
___

1.     Ge – literal meaning is “older brother”. Here Zheng Yuan was using that as a respectful form for someone older than him, not that they are actually related.