After arranging Feng Cheng to stay in the guest room, Murong Yun Shu returned to Qingfeng Pavillion in her private courtyard, waiting for the uninvited guests. Sure enough, they arrived before she could even warm her seat.

"Madam," East, South, West, North Guardians lined up outside her study respectfully and very gentleman-like, as though they would not enter unless she invite them.

"You need something?" She asked the obvious questions.

"Boss sent us to bring something to you," replied East Guardian. West Guardian produced a fit-size, square brocade box, holding it in both hands, like it was an offering.

"Miss, here," Lu'er took the brocade box and handed it to her Mistress.

Murong Yun Shu took the brocade box from Lu'er, gave the four guardians a cool look and gently opened the box. On top a red fabric laid an elegant Lantian jade pendant with gold rim. The pendant was wide on top and narrow on the bottom, the shape was plenty odd. The top side carved a fiery red manjusaka1 and the back side a very expressive, calligraphy form of the character "Ge"2. This jade is an emblem of Chu Changge, but why was he giving it to her now? What was the meaning of this? 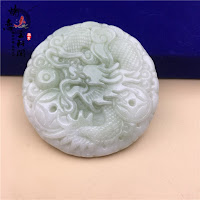 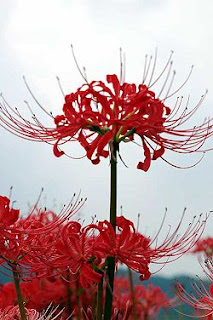 Murong Yun Shu closed the brocade box and looked at the four guardians. "Why is he giving this to me?"

Eastern Guardian said, "This not just any common jade. It's a special jade from ancient times. It has the ability to get rid of all poisons. If you wear it close to your body, it can also repel all poisons. It used to be the commanding badge of generations of mojiao sect leaders. It represented the leader being there whenever it went. Later on, our leader split it into two and hired someone to polish them into two separate pieces -- one of them is the ying one and the other pieces the yang one. Together they can be piece together into the taichi symbol. This is the yang piece and has been guarded by our leader. But another reason he had us gave this you was because of it's name."

Upon hearing that, Murong Yun Shu re-opened the brocade box and picked the jade pendant up in her hand. A cool touch entered her body through her fingers and it was a very pleasant sensation. "The Soul Snatcher and the Soul Locker, certainly sounds like it'd be something useful." She whispered to herself.

"Not just sounds useful, it is useful," West Guardian emphasized that as he nodded forcefully.

"'Lil' North!" shouted the other three guardians. East Guardian gave him a stared then said to Murong Yun Shu, "Sect leader has another message for you."

Murong Yun Shu nodded lightly, signaling him to go on.

Murong Yun Shu chortled. She thought he was going to say "if she's alive, bring her in person; if she's dead, bring her corpse." She brushed away the hair in her face, coolly she said, "Okay, you can go report back to him now."

"Sect leader ordered us to stay and protect Madam. If anyone want to hurt you, including god or Buddha, there will still be no hesitation."

Murong Yun Shu felt a warm feeling in her chest. She remained silent for quiet a while so she could suppress that feeling, then ordering Lu'er, "Bring the four to the guest rooms."

"We will retire now."

As soon as they have stepped out of Qingfeng Pavillion, North Guardian griped, "Why didn't you let me finish what I was saying? Madam was poisoned by the Soul Snatch, she could wear the ying jade on her from now on, but it is not going to save her. That means the jade is useless when it comes to the Soul Snatcher, why do you try to keep that from Madam?"

East Guardian speechlessly shook his head in pain; he refused to dignify North Guardian's question with a response. South Guardian remained silent as well. Testily, West Guardian said, "Sect Leader knows full well that the Soul Locker jade pendant doesn't work on Soul Snatcher, yet he still gifted it to Madam because he wanted to make her feel better. If you tell her the truth, that would defeat the whole purpose."

Enlightened, North Guardian immediately felt ashamed of himself. He was in so much self-loath that he couldn't even lift his head. A few steps later, something dawned on him, "Hey, aren't we always trying to ruin Sect Leader's plans?"

"Yes, but only when it comes to irrelevant things. This is Madam's life and death matter, we don't have time for that."

"Yeah, I guess you are right," said North Guardian, then mumbled, "First is elder miss,  now it's Madam. It's almost like the Soul Snatcher has something against our Sect, right?"

West Guardian was visibly upset. In a murderous tone, he said, "Don't let me found out who created this Soul Snatcher. Otherwise, with or without direct order from Sect Leader, I am going to kill them and all their relatives of the ninth degree."

At this very moment, Murong Yun Shu held the jade in her hand while standing in front of a window. Staring peacefully at a banana tree, her mind was far, far away.

Murong Yun Shu sighed lightly. She flipped the jade over and gently rubbed the word "Ge" with her thumb. She was a somewhat baffled, but at the same time somewhat clear. It was as though she was trying to pick a flower in the fog, it felt like she got something, but also like she got nothing. Her mind was filled with confusion.

Nonetheless, this jade pendant was modified from the Sect Leader's commanding badge, and that Chu Changge had been wearing it for years, it certainly meant a lot to him. She really should return it to him, she didn't do anything to earn it. Not to mention this could be very misleading in a different sense, those who didn't know better might thought this was a sign of his affection....

Suddenly, she paused in her thoughts then shook her head to dispel the silly notion. She suppressed the sudden, inexplicable joy that she was feeling. She placed the jade back into the brocade box and put it away.

When she see him again, she'd give it back to him in person. That's what Murong Yun Shu told herself. She took a deep breath and ridding herself of all the disturbing emotions. Not a moment later, she was back to her usual tranquil self.

1. Manjusaka is it's name in Sanskrit. Scientific name is: Lycoris radiata. It's other name is red spider lily, but since the Chinese language used it's Sanskrit name, I decided to stick with that as well. Also works better considering the time period. :)
2. A character in Chu Changge's name.
- October 23, 2018